Azumanga Daioh: The Video Game is a game for the Nintendo Gamecube, Xbox, and the Gameboy Advance. The game was later re-released for the Xbox 360, Wii, PS3, PS Vita, and the Nintendo 3DS. You play as the 6 azumanga girls Osaka, Chiyo, Sakaki, Tomo, Yomi, Kagura. The game is rated T for teen due to violence and profanity.

The game begins when the 5 girls go to Chiyo's and when they enter the house a news emergancy broadcast goes on. It says that there will be a alien invasion happening. Tomo thought it was just a prank until a laser beam destroys part of Chiyo's house. The girls are devestated on the destruction of the city. When the alien robots are too much for the army the girls decide to go on a epic adventure to save the world.

Plot:The girls teach you how to play the game

Plot:Fight all the alien robots that are invading Chiyo and Sakaki's neighborhood

Plot:Wipe out all the aliens that are invading downtown

Plot:Get thourgh an entire department store which is infested with alien robots

Plot:Go to Chiyo's summer home on the freeway without the aliens foiling your plan

Plot:Secure Chiyo's summer home without getting destroyed by the aliens

Plot:Rescue all thepeople that are captured by the aliens in the beach

Plot:Get out of a camp that is filled with alien robots

Plot:Go thourgh the forest without Osaka, Tomo, Yomi, Kagura, and Sakaki trying to save you

Level 14:Get to the boat

Locations:End of forest and Lake Docks

Plot:Get from the end of the forest to the lake docks

Plot:Get to Okinawa before the aliens do

Plot:Wipe ou all the aliens that are invading Okinawa

Plot:Go on the freeway to MagicalLand without the aliens trying to destroy you

Plot:Go to the leader of the aliens robots lair

Plot:Defeat the leader of the alien robots

Level 22:Escape from the Mothership

Plot:Get out of the Mothership before it explodes

In the game you can punch, super punch, kick, super kick, punch and kick combo, sprint, and pick up ray guns. The game is for many systems and here are the Xbox 360 controls. You move the joystick to move, press the D pad to switch characters, move the bottom joystick to rotate the camera, press START to pause, press BACK to resume, press A to jump, double click A to double jump, press X to punch, press Y to kick, press X and LB to super punch, press Y and RB to super kick, press X and Y together to punch and kick combo, press RT to shoot lasers, when you play as Chiyo you press B to switch to Mr.Tadakichi, and press LT to﻿ sprint.

When the game was first released McDonalds were selling toys of Azumanga Daioh when you get a kids meal. In Toys R us they were selling limited edition Chiyo and Mr. Tadakichi plushes.

Azumanga Daioh: The Arcade Game is a game you can get on Xbox Live Arcade and Playstation Network. You play as Osaka and Chiyo and you have to collect the Sata Andgai (an Okinawan donut) and make sure not to run into Chiyo-chichis.﻿

This is is so fun to play when your bored and this game is hard and if you like alien game like Alien Resurrection for the Playstation then this game is perfect for you.

A perfect example of modern videogames. Fun, Fast and Sexy. A perfect starting point for those new to the azumanga francise. 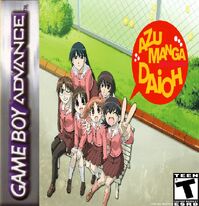 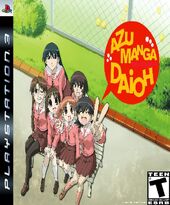 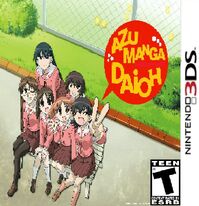 Add a photo to this gallery

A PlayStation 2 version was in development, but it was eventually cancelled.

Retrieved from "https://videogamefanon.fandom.com/wiki/Azumanga_Daioh:_The_Video_Game?oldid=35076"
Community content is available under CC-BY-SA unless otherwise noted.