Fish Hooks: The Video Game is game for the Wii, Nintendo DS, Xbox 360, Playstation 3, and PSP. The game is based on the episodes of Fish hooks and in the levels you play as the three main characters Milo, Bea, and Oscar and in one level you can play as Milo's ninja. You can also play mini games and can even unlock three episodes of the show.

Level 1:It just stays in the picture

Plot:Explore the school and get pass Clamantha's maximum yearbook office to get Bea's yearbook picture

Plot:Rescue Oscar from being kissed by Clamantha in Lovers Tank

Level 3:To the Tank

Plot:Ride on the cat to get to Milo and Oscar's tank

Plot:Ride on Bo Gregory's truck to get to Fish Niagra Falls to see Doris Flores Gorgeous

Plot:Escape Freshwater High when you get nothing for Jocktopus's birthday

Level 7:Dogs are fish too

Plot:Find Milo's dog Murphy when he runs away out of the tank

Plot:Fly a advertising plane across Fish City Central, but watch out for obstecles

Plot:Escape from the Fish Forest to Milo and Oscar's Tank without the wolf fish trying to catch you

Plot:Play as Milo's ninja and defeat Jocktopus to save Albert Glass

Location:Set of I Dares you

Plot:Compete in the Toilet Bowl Roller Derby to get Albert Glass to like you as a friend

Plot:Find a antidote at the Science room to make Milo stop growing

Plot:Secure the Boy's float from the girls trying to foil you

Plot:Stop Milo from Recycling like crazy and make him meet the real Earth Troll

Level 18:The Legend of Oscar

Plot:Fight the parasites that are invading the school and save the students

In the game you play as Milo, Oscar, Bea, and Milo's ninja. The levels are based on episodes in Fish Hooks. You can also play mini games like Waitress Bea where Bea gets a part time job at the Hokey Poke and has to serve guests at lunch rush, the game is similar to Diner Dash.Another mini game is for Milo and called Motocycle Maddness the game is about Milo races the motocycle he got when Randy Pincherson loaned money to him. In the game you have to compete for the grand prize and in the game you race three tracks three times. Oscar has another mini game called Runway Oscar it's about that Oscar has to go from Freshwater High to home and don't let Clamantha kiss you.

This is the next great Nintendo DS Disney game ﻿

WHAT IS WRONG WITH YOU NINTENDO?! THIS GAME SUCKS! 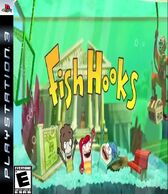 Add a photo to this gallery

Retrieved from "https://videogamefanon.fandom.com/wiki/Fish_Hooks:_The_Video_Game?oldid=36453"
Community content is available under CC-BY-SA unless otherwise noted.